Reuters is reporting that Libby has been found guilty in 4 of the 5 charges of lying, obstructing justice in the CIA leak case.
Posted by Unknown at 9:19 AM No comments:

Ann thinks all democrats are gay?

Posted by Unknown at 1:29 AM No comments:

This is a good video

Posted by Unknown at 1:26 AM No comments:

People in the trial 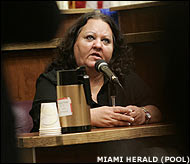 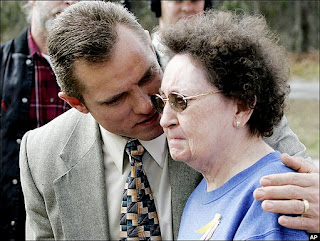 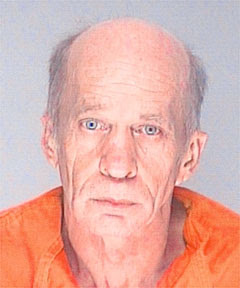 Posted by Unknown at 1:10 AM No comments:

Email ThisBlogThis!Share to TwitterShare to FacebookShare to Pinterest
Labels: Crime, Jessica Lunsford
I hate to brush through a topic that is as important as the Jessica Lunsford case, but I am getting close to my bedtime and I need sleep. Court was in today, and I will give you quick run down from my sources of what happened.
The court opened with the prosecution telling the court that one of its witnesses had seen part of the trial on TV. While the defense moved to have the witness taken out off the witness list, the judge over-ruled that motion. It turns out that the parts of the trial that the witness saw did not relate to the testimony that he will be giving.
The defense continued to attempt to cast a shadow of doubt on the other residents of Couey's home. His sister's boyfriend was on the stand today, and Lewan asked him about the events of the night that Jessica went missing and what he did that night. He asks about drug use, which like Couey's sister, he admits to smoking a little crack.
Gene Secord, the estranged husband of Couey's neice Madie Secord, testified today to a couple of damaging facts for the defense. He told of how when police came to the house the first time, before they knew Couey was a sex offender and living there, that Couey ran out the back door. The most harmful fact relates to a conversation they had when they were both in jail together. Gene Secord asked Couey how he was able to do what he did to the girl, and Couey said that it was all behind him now.
The defense continues its other strategy of questioning the security of the crime scenes. Inside the Couey home and inside the Lunsford home, at one point Lewan asked if it were common practice to allow someone to live in a place that was believed to be a crime scene that way the Lunsfords were allowed to. This could backfire for the defense for the jury.

Jessicas mother was in court today as well, she had not seen Jessica for a number of years, since she and Jessicas father Mark got a divorce.

A finger printe expert was on the stand next. He talked about finger prints found on a glass table and on a pizza box that was delivered to the home. The defense again tried to imply that other people in the house knew what was going on. He asked if all the prints had been tested, and the expert said they had not all been tested. Defense attorney Lewan then asked if they were compared to the other adults in the house, and the expert said they had not.
After lunch the trial goes from finger prints to the cord around Jessicas neck. Another expert talks about how he matched the cord around her neck, to a cord that Couey had said he was using to make an antanea on the roof. The defense attorney attacked him, and tried to claim that he was not really an expert.
A DNA expert took the stand next and talked about the DNA found on the mattress and in the closet that was a match to Jessica's. She also testified about finding Couey's semen on the mattress and the locations where both the DNA samples were found. The defense attorney spent a long time asking her about the methods she used of testing and even asked her about the clothes she wore. Like the finger prints, all the questions come down to why more testing wasn't done and why none of the blood was tested against the other adults in the home.
Posted by Unknown at 12:44 AM No comments: