"E! News confirmed Tuesday that the five-time Grammy winner and hubby Jordan
Bratman are expecting their first child together. This will be baby number one
for both. There was no immediate comment from a publicist for the couple.'"

Congrats to her and her family.
Posted by Unknown at 11:58 PM No comments:

"Kimberly, the 26-year-old daughter of Rod Stewart, met the 44-year-old Motley
Crue star in London earlier this year and they are now said to be an item.
Kimberly was spotted running out of the launch party of restaurant Pink
Taco’s new Los Angeles branch to be with Tommy after he was denied entry because
the fire department had shut the party down."

Why would someone want Pamela's sloppy seconds?
Posted by Unknown at 11:56 PM No comments:

Courtney Love claims her macrobiotic diet made her fat-Celebrity News

Courtney Love claims her macrobiotic diet made her fat-Celebrity News:

"Courtney Love claims her macrobiotic diet made her fat.The former Hole
singer gained weight by binging on macrobiotic food, and only achieved her
current slim figure by locking her fridge and replacing meals with diet shakes.
Courtney told People magazine: “I gained 40 to 50 pounds on macrobiotic
food.”"

I love you Courtney, but if you gained weight it was because you were not following the diet the way it should be. Macrobiotics is not just about what you eat and don't eat, it is about how you eat and how much you eat.
Posted by Unknown at 11:52 PM No comments: 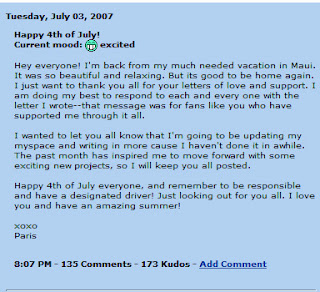 Gabby Babble: Words Of Wisdom: "Saint Paris Hilton has posted a 4th of July message on her MySpace blog"
Posted by Unknown at 11:41 PM No comments:

Gabby Babble: It's Over!

Gabby Babble: It's Over!:

"Despite the reports that Paul Sculfor is better in bed than Brad Pitt, Paul and
Jennifer have broken up, at least for now."

The relationship between the B list star and the D list celebrity is over.
Posted by Unknown at 11:39 PM No comments:

"According to TMZ, Nicole Richie is definitely pregnant with Joel Madden’s
child. I don’t know who their sources are, but TMZ and In Touch Magazine are
both reporting that Richie and Madden are expecting and are also getting married
this summer, pre-baby, of course."

This is not the news I wanted to read today. Next think you know Paris is going to be pregnant. Honestly I wish her and her man Joel the best of luck. I think they are going to need lots of it, and that poor child is going to need even more.
Posted by Unknown at 11:19 PM No comments: 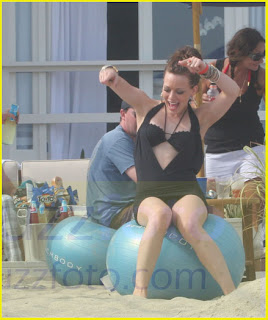 Buzz Foto LLC - Paparazzi Is An Art Form!: "Hilary Duff Having a Ball on a Medicine Ball!"
Posted by Unknown at 11:16 PM No comments: 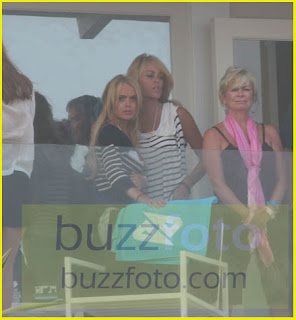 "Loopy Lindsay Lohan and her mom Ditzy Dina at Lindsay’s Malibu Beach party on July 4th"
Posted by Unknown at 11:15 PM No comments:

Britney Apologizes With An Elegant Letter

A Socialite's Life: Britney Apologizes With An Elegant Letter

"Dear x17, I want to apologize for the past incedent with the umbrella. I was
preparing a character for a possible movie role where the husband doesn't play
his part so they swap places. Unfortunatly I didn't get the part. I'm sorry I
got alil carried away with my role! Britney"

This may be the dumbest thing that she has ever said, this ranks up there with Winona claiming to be studying for a part when she was caught stealing.
Posted by Unknown at 8:52 PM No comments:

"This is a heartwarming ending to that story. Remember some years ago when Hugh
Grant's stammering English ass got caught with a prostie named Divine in L.A.?
And he went on Jay Leno and apologized to the world? Yeah, that was hot. Anyway,
Divine is resurrecting that story on a new British television special and says
that she got so much money from ruining Hugh Grant's life that she was able to
afford school for her kids! Turning tricks pays!"

Honestly it is good to hear that she put the money to such a good use. That means that was otherwise just another scandal, actually brought about something positive.
Posted by Unknown at 8:39 PM No comments:

"Doing his best to keep those bankruptcy rumors at bay, a rep for the dethroned
King of Pop has confirmed that Jackson is currently house-hunting in the tony
Chesapeake Bay region of the state.
Jackson's long-suffering publicist,
Raymone Bain, told the Washington Post that the entertainer, accompanied by his
three children, moonwalked over to the eastern shore 'for about 24 hours' last
week to scout out some vacation homes."

Keep the kids inside. I hope he isn't going to build another amusement park to lure the kids to come and play with him.
Posted by Unknown at 8:32 PM No comments:

"A pair of U.S. songwriters allege her contagious single sounds
suspiciously like a song called 'I Wanna Be Your Boyfriend,' released by the
Rubinoos in 1979.
Lavigne's manager, Terry McBride, scoffed at the charges,
calling the suit 'baseless' and little more than a 'case of legal
blackmail.'"

Who would claim to have written such a bad song, really.
Posted by Unknown at 8:24 PM No comments: