"The Britney Spears circus took a sad turn Thursday night as police,
firefighters and ambulances were called to Britney’s Beverly Hills home after
she refused to give her children back to ex-husband Kevin Federline."

This is a sad turn of events, Britney has lost it and she will lose her kids because of this.
Posted by Unknown at 11:56 PM No comments:

It is Barack Obama and Mike Huckabee.
Posted by Unknown at 7:17 PM No comments:

Hot Air » Blog Archive » A pair of “honor killings” in Texas Updated: The girls were scared of their dad Additional updates

Hot Air » Blog Archive » A pair of “honor killings” in Texas Updated: The girls were scared of their dad Additional updates:

"The girls were 17 and 18, named Sarah and Amina, and police in the affluent
Dallas suburb of Las Colinas say he killed them in his own cab and is still
armed and considered dangerous. WFAA-TV in Dallas says that police believe they
have him surrounded in a residential area of Lewisville, TV."

Could this have been an "honor killing"? How can there be any honor in killing two teenage girls?
Posted by Unknown at 2:39 PM No comments:

"In the summer of 2002, the FBI, the Baton Rouge Police Department, and several
other agencies began a massive search for a serial killer suspected of murdering
three women. Based on an FBI profile and an eyewitness report, they upended
southern Louisiana looking for a white man who drives a white pickup, collecting
DNA from more than 1,000 Caucasian males. They found nothing. Meanwhile, the
killer struck again.In March 2003, investigators turned to Tony Frudakis, a
molecular biologist who said he could determine the suspect’s race by analyzing
his DNA. Uncertain about the science, the police asked Frudakis to take a blind
test: They sent him DNA swabs from 20 people to see if he could identify their
races. He nailed every one.On a conference call a few weeks later, Frudakis
reported his results on their killer. “Your guy could be African-American or
Afro-Caribbean, but there is no chance that this is a Caucasian.” There was a
prolonged silence, followed by a flurry of questions. They all came down to
this: Would Frudakis bet his life on his results? Absolutely."

Depending on how it is used, this seems like a fair and a good way to focus on a suspect. It could mean that if you have a number of suspects, some white and some black - you could focus on the black ones. What it shouldn't be used for, is to target all black males, just because they are black and male.
Posted by Unknown at 2:33 PM No comments:

American Thinker: The Other Jihad: Islam's War on the Hindus

American Thinker: The Other Jihad: Islam's War on the Hindus:

"Pakistan and its nuclear arsenal catastrophically may fall into the hands of
jihadists. But the South Asian version of jihad is a less familiar but no less
fearsome variant of the war directed at the Great Satan America, and the Little
Satan, Israel.
At one billion people, Hindus, the majority of whom live in
the Indian sub-continent, constitute the third largest religion in the world
after two billion Christians and 1.5 billion Muslims. Yet, their numbers have
not spared Hindus from ongoing, systematic Muslim attacks in India, Pakistan and
Bangladesh."

The world isn't set with a battle of the West against Islam, it is a battle of those who have a vision of a world in submission to Islam, against those who understand freedom and faith.
Posted by Unknown at 2:15 PM No comments:

Ron Paul may have raised more than his GOP opponents last quarter, and as much as Hillary - AMERICAblog: A great nation deserves the truth

Ron Paul may have raised more than his GOP opponents last quarter, and as much as Hillary - AMERICAblog: A great nation deserves the truth:

"Presidential candidate Ron Paul raised almost $20 million for his campaign in
the last three months, potentially outpacing every one of his Republican rivals
and putting his fundraising in league with Hillary Clinton's."

Will this mean votes for Paul at the polls though?
Posted by Unknown at 2:12 PM No comments:

Thompson's already failed campaign could be the first casualty of Iowa - AMERICAblog: A great nation deserves the truth

Thompson's already failed campaign could be the first casualty of Iowa - AMERICAblog: A great nation deserves the truth:

"Several Republican officials close to Fred Thompson’s presidential
campaign said they expect the candidate will drop out of the race within days if
he finishes poorly in Thursday’s Iowa caucus."

As such is the best laid plans of mice and men.
Posted by Unknown at 2:07 PM No comments:

A Blog For All: Palestinian War Against Israel Continues

A Blog For All: Palestinian War Against Israel Continues:

"The Palestinian terrorists remain convinced that they can defeat Israel
and take its land as its own. They must be disabused of that notion. That means
that the Palestinians must be defeated - unconditionally."

This is a sad situation, the violence means that many innocent people are dying in this conflict. The solution doesn't appear to be easy though. You can't talk to people who are set on destroying you, and that is the case that Israel is up against.
Posted by Unknown at 2:05 PM No comments:

"Irving police have issued a capital murder warrant for a cab driver
accused of fatally shooting his two teenage daughters.
The bodies were found in his taxi."

How could someone do that to their own children?
Posted by Unknown at 1:35 PM No comments:

Posted by Unknown at 1:31 PM No comments:

Posted by Unknown at 1:29 PM No comments:

"Britney Spears left her car parked in the drive-in lane of the Four Seasons’
underground car park and refused to move it or hand over the keys until she was
threatened by staff. She then had to be turned away from using the hotel’s spa,
prompting her to rant, “Do you know who I am. I f**king built this place. I’ve
spent so much money here I could have bought the God-damn hotel.”"

It is sad to see this happen to her.
Posted by Unknown at 1:14 PM No comments:

"Everyone is going crazy these days, if you are giving birth I guess the
last thing you wanna be is quiet… that’s not the case for our pregnant Jennifer
Lopez, who wants to give birth naturally and drugs free."

I don't understand why people think this is so crazy. I am not a Scientologist, but the idea of having a silent calming birth sounds better than a loud and stressful birth.
Posted by Unknown at 1:13 PM No comments:

Indian Men: Not So Welcoming To Women These Days

Indian Men: Not So Welcoming To Women These Days:

"There is a flurry of stories today about the shoddy treatment given
Indian women by some Indian men. First comes the story of 22-year-old Monika
Rani, an Indian transplant living in Oak Forest, Illinois. Monika's father,
Subhash Chander, is charged under arrest for setting fire to Monika's apartment
on Saturday, killing her, her 3-year-old son, her husband, and their unborn
child. Police and friends of the family believe that the killing was motivated
by caste, or class differences -- Subhash thought his daughter had married a man
beneath their family."

A little more information on a story I blogged about yesterday.
Posted by Unknown at 1:10 PM No comments:

"Has Kate Hudson found a new man? There are reports that she and Matthew
McConaughey are an item. And that the two have embarked on a secret trip to a
Caribbean hideaway."

I think they would make a cute couple.
Posted by Unknown at 1:06 PM No comments: 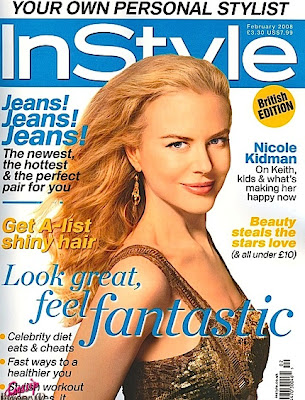 Nicole Kidman does InStyle
Posted by Unknown at 12:17 PM No comments:

"Angelina Jolie has ended the rift between her and her estranged father, Jon
Voight by reaching out with a telephone call. The pair hadn’t spoken since
Voight told a U.S. television show in June 2002 that he hoped Jolie sought help
for her “serious emotional problems”."

This is just good news, a family shouldn't be torn like this one was.
Posted by Unknown at 12:12 PM No comments:

Suri Cruise considered to be the voice of the ‘Knut’ movie

Suri Cruise considered to be the voice of the ‘Knut’ movie:

"She is not even two yet but Suri Cruise is being considered for her first
movie role. Producer Ash R Shah is thinking about making a movie about Knut, the
infamous polar bear at the Berlin Zoo and thinks that mini Cruise could get a
starring role."

A movie about a polar bear, voiced by Suri Cruise... does this really sound like a good idea? Sounds like Tom is willing to do anything to save his ass.
Posted by Unknown at 12:10 PM No comments: 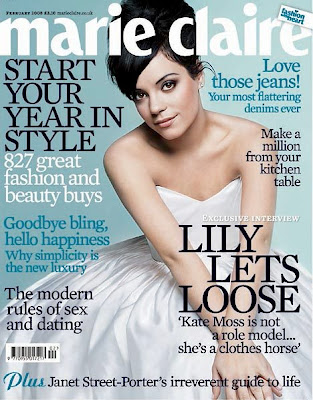 "Bi-sexual MySpace and MTV star Tila Tequila has let it leak that there will be
a second serving of her whore-fest dating show ‘Shot at Love’."

Why should the viewers of this show, or the people who are going to be on the show take this seriously as a second season? If she didn't find love in the first season, what makes us think she will in this season. How do we even know that she is looking for love.
Posted by Unknown at 12:06 PM No comments:

"How do you subtly let a guy know that you're interested? Well, according to
Lindsay Lohan, dry-humping him in public is a good way to let him know that you
think he's swell."

Looks like our dear Lindsay has over come one problem in her life, but clearly faces others. Could this be an attempt to gain the love of a man that she never got from her father.
Posted by Unknown at 12:03 PM No comments:

"The latest news say that Britney and her boys, Sean Preston and Jayden James,
spent the new year with her ‘wannabe’ friend, a married paparazzo named Adnan
Ghalib."

Why is Britney spending so much time with a married man?
Posted by Unknown at 12:01 PM No comments:

"Even though it was reported in The Daily Mail, Nicole Kidman’s peeps are
denying the pregnancy rumors. 'As far as we are concerned it is another rumor.'"

It is a shame this isn't true, Nicole should have some kids.
Posted by Unknown at 11:56 AM No comments:

"Jake Gyllenhaal and Reese Witherspoon are slowing coming out of the
relationship closet after a much-ridiculed public clinch in Rome, Italy that
seemed a little too conveniently timed with the release of their film
Rendition."

I think that Jake and Reese are going to be the Brad and Angelina of 2008. They are a hot couple.
Posted by Unknown at 11:55 AM No comments:

"After Lindsay Lohan’s ex, Riley Giles, talked about seeing Lindsay Lohan
naked and sold their lovemaking details and pics to the UK’s News of the World,
Lindsay’s mom, Dina Lohan, did what any concerned, protective mother would do.
She got on the phone and chewed out Riley Giles’ mom."

Because Dina Lohan is mother of the year, right?
Posted by Unknown at 11:52 AM No comments: 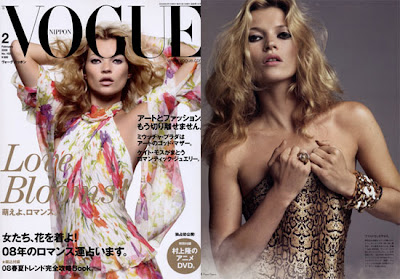 Kate Moss Strips Down, Jewels Up For Vogue Japan Kate Moss POPSUGAR - Celebrity Gossip & News.
Posted by Unknown at 11:48 AM No comments:

"Despite hearing that our girl Brit might not show up to be deposed in her
ongoing custody battle for her kids, Britney has indeed shown up at Mark Vincent
Kaplan's office this morning at 11:20. She's with her assistant Carla, wearing a
pink dress, says our source on the scene."

This is a very small step in the right direction for Britney.
Posted by Unknown at 11:44 AM No comments:

Email ThisBlogThis!Share to TwitterShare to FacebookShare to Pinterest
Labels: Game


Celebrity Jeopardy-Ozzy,Stewart,Connery - Click here for more free videos
Posted by Unknown at 12:59 AM No comments: