" Four months after welcoming her third child and two weeks before turning
40, Julia Roberts says she has 'all I could ever ask for.' "

She sounds so happy, this is great to hear. Maybe one day even Britney will find this happy place in her life.
Posted by Unknown at 8:33 PM No comments:

"Orlando Bloom is a stand up human being. Leaving injured people at the scene of
a crime and getting legal advice from the paparazzi. Wow. Remind me to take down
that Legolas poster on the back of my door. Fantasizing about a medieval elf
whisking me away to the depth of Mordor is going to be much more difficult now
that I want to violently attack him with a 2×4."

He was probably tired and upset and not thinking clearly. It could also be that he was leaving because he knew that the cameras would go with him, at least most of them. He may have wanted to save his friends the embarrassment of being filmed at the crash. It is still a poor choice though.
Posted by Unknown at 8:28 PM No comments: 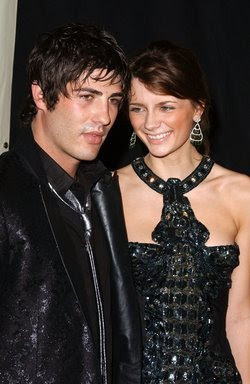 "Mischa Barton was spotted at a MS charity with Brandon Davis aka Greasy Bear.
Are they really dating? Who knows. But it's not like Mischa has had the best
taste in guys eh? They actually compliment each other well, don't they?"

What the hell are these two doing together? Yikes they would have ugly kids.
Posted by Unknown at 8:23 PM No comments:

Posted by Unknown at 2:29 PM No comments: