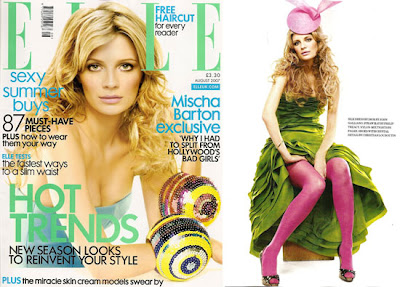 Mischa Says She's Not Like Other Starlets | POPSUGAR - Celebrity Gossip & News.
Posted by Unknown at 11:10 PM No comments:

On the way home to Medina Abdullah set aside a fifth of the booty for Muhammad.
But when they returned to the Muslim camp, Muhammad refused to share in the loot
or to have anything to do with them, saying only: “I did not order you to fight in the sacred month.” But then Allah revealed v. 217, explaining that the Quraysh’s opposition to Muhammad was more offensive in his eyes than the Muslims’ violation of the sacred month: the raid was therefore justified: “for persecution is worse than slaughter.” Whatever sin the Nakhla raiders had committed in violating the sacred month was nothing compared to the Quraysh’s sins. Ibn Ishaq explained this verse: “they have kept you back from the way of God with their unbelief in Him, and from the sacred mosque, and have driven you from it when you were with its people. This is a more serious matter with God than the killing of those whom
you have slain.”

I think this is part of the basis for arguing that Muslims can fight during the holy months of Ramadan. It is interesting that when the war in Afghanistan was starting there was talk in America about holding back during the holy month. Clearly if we had done that, the terrorists would have used that month to attack us before we attacked them.
Posted by Unknown at 10:44 PM No comments:

Best of the Week 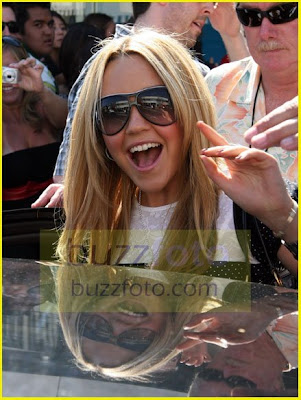 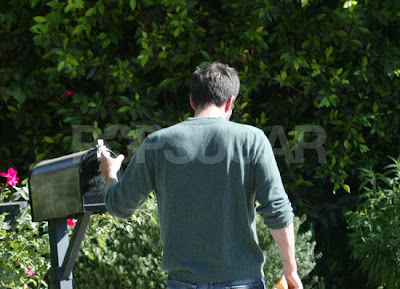 Guess Who? POPSUGAR - Celebrity Gossip & News.
Posted by Unknown at 9:48 PM No comments:

"Rebecca Romijn and Jerry O'Connell wed yesterday in LA in front of 100
guests. 'Rebecca and Jerry were married on Saturday evening in an intimate
ceremony at their home surrounded by family and close friends,' said a rep for
the actress, who wore Ralph Lauren. 'It was a perfect celebration and Jerry and
I couldn't be happier,' said Romijn. The couple became engaged in September 2005
after about a year of dating. It is the first marriage for O'Connell and the
second for Romijn."

Congrats to them, and I wish them luck on their future.
Posted by Unknown at 9:47 PM No comments:

Posted by Unknown at 9:44 PM No comments:

"Well, I guess Donald Trump has more in common with Britney Spears these
days other than bad hair. Apparently, he likes to hang out in the same places
because he was seen at L.A. club Area which happens to be one of Brit's favorite
spots. He probably just wants publicity out of this, but it is funny that he
would hang out at a Britney spot. I'd love to see him shave his combover, but I
surely don't want to see him without underwear!"

Maybe he was hoping he would run into Britney and she would be a part of his new show where he turns whores into womyn.
Posted by Unknown at 9:39 PM No comments:

I Guess Jordin Sparks is a Real Celebrity Now

I Guess Jordin Sparks is a Real Celebrity Now:

"TMZ has learned that “Idol” winner Jordin Sparks has fallen head ovah heels for
Justin Timberfake wannabeen Chris Richardson! This is her now! While she and
runner-up Blake Lewis are just friends, we’re told Jordin has a huge crush on
23-year-old Richardson — despite his penchant for late nights and hanging out
with the likes of Lauren Conrad. Boys will be dogs!"

I don't know that much about Sparks, but it is good to see that she is jumping right into the Hollywood dating pool. Yeah of course it is just a Justin Timberlake wannabe right now, but within a couple months it might be a Tom Cruise wannabe, wait are there any Tom Cruise wannabe's?
Posted by Unknown at 9:36 PM No comments:

Posted by Unknown at 9:33 PM No comments:

Posted by Unknown at 9:28 PM No comments:

While it clearly looks like at this point, Bush is just blocking investigations as a way of getting back at the Democrats, the end result is that it makes them both look silly. I don't know why congress feels the need to investigate the death of a football player, and it doesn't feel the need to investigate the death of every other soldier. At the same time, what could Bush be trying to hide, what could be the importance of the materials he is refusing to hand over.

If they want to save electricity in Washington, they should send Bush back to the ranch and send congress home, nothing is going to be done until the election in 2008.
Posted by Unknown at 9:26 PM No comments: 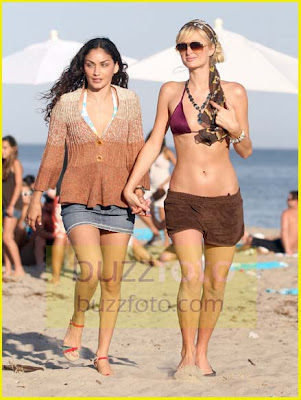 Buzz Foto LLC - Paparazzi Is An Art Form!: "One Last Paris Foto!"
Posted by Unknown at 9:19 PM No comments:

"READING, Pennsylvania (AP) — Consumer advocate Ralph Nader told the Green
Party's national convention that he is considering a 2008 presidential run and
accused Democrats of trying to shut smaller parties out of the political
process."

You know who would make a great running mate for him, Ron Paul.
Posted by Unknown at 9:18 PM No comments:

Posted by Unknown at 9:17 PM No comments:

Think Progress » Webb Rips Graham As ‘Politician Trying To Put His Political Views Into The Mouths Of Soldiers’:

"This morning on Meet the Press, Sen. Jim Webb (D-VA) took Sen. Lindsey
Graham (R-SC) to task for spouting “support the troops” rhetoric while failing
to take action to safeguard the long-term health of the military. "

I think far too many people are claiming to speak for the troops, let the troops speak for themselves. There are some who are for the war and there are some who are against the war. That said I don't know that the opinion of a soldier is automatically more meaningful than an informed citizen, no matter how that citizen feels about the war.
Posted by Unknown at 9:16 PM No comments:

Waziristan Tribes To Musharraf: It's On

Captain's Quarters: Waziristan Tribes To Musharraf: It's On

"Pro-Taleban militants in Pakistan's North Waziristan region say they have ended
their truce with the government.
In a statement issued in Miranshah, the main town, the militants accused the government of breaking the agreement.
It came as Pakistan deployed more troops in the area fearing 'holy war'
after the storming of the militant Red Mosque last week that left 102 dead.
More than 50 Pakistanis, including soldiers and police recruits, have died
in three attacks in the last two days."

Looks like the shaky and unproductive truce with the militants along the border with Afghanistan has fallen apart. I think this is a good thing, the truce was mostly one sided anyways, as the militants had not been keeping up their end of the agreement. I know that there are lots of innocent people who live in those tribal lands, and I know that the tribes themselves which have their own institutions are not the terrorists, but something needs to be done to flush the terrorists out. Information I have read inclines me to believe that the truce that was made between the government and the tribes wasn't broken by the tribes out of choice as much as fear. There is a group of terrorists that have taken hiding in the tribal areas, and it could be argued have taken the tribes hostage. If they cooperate with the government to much they are killed by the terrorists, if they cooperate with the terrorists too much the are targeted by the government. If we could tell Cain from Abel, I think we could arm Abel against Cain, but that is a big IF.
Posted by Unknown at 9:13 PM No comments:

"PBS omnipresence Bill Moyers devoted his entire hour-long Bill Moyers Journal
on Friday night to the need to impeach George Bush and Dick Cheney. The stacked
hour had two guests, and both were aggressively pro-impeachment: John Nichols of
The Nation magazine, author of the book 'The Genius of Impeachment,' and lawyer
Bruce Fein, who Moyers labeled a 'conservative,' but he compared Bush to King
George III, to Adolf Hitler, to the communist autocrats of the Gulag, and to,
well, FDR, in suggesting the post 9-11 era could see a mistake like our
interning of Japanese Americans. In this conversation, Moyers sometimes played
the skeptic, but the overall tenor of the hour was not only anti-Bush, but
anti-Speaker Pelosi for being so timid: 'Why doesn't Nancy Pelosi see it her
duty to take on at least the impeachment hearings that you say would educate the
public?'"

Impeachment is wrong for America, I thought it was wrong when the republicans did it to Clinton and I believe that it is wrong now. Democrats need to invest their time and energy into their own candidates and winning elections in 2008. Moveon.com was started under the premise that the best way to deal with the Clinton problem was to censure and move on. I say the best thing Democrats could do right now is isolate Bush and move on.
Posted by Unknown at 9:06 PM No comments:

"North Korea announced that it has closed their nuclear reactor at Yongbyon, an
essential step in their nuclear disarmament that many had despaired of Kim
Jong-Il ever taking. The closure follows the delivery of over 6,000 tons of fuel
oil and the transfer of $25 million in previously frozen funds. The IAEA has
sent its inspectors to the plant to verify its closure and to monitor its
status:"

While I don't know that credit will be given to Bush for this success, it should be fairly noted that at least in terms of dealing with North Korea his administration is having success. More success needs to follow, and more progress and a deepening of the relationship between our countries need to be established still. All great journeys start with a step, and this could be equivalent of Nixon visiting China.
Posted by Unknown at 9:03 PM No comments:

Although Bush administration officials have frequently lashed out at Syria and
Iran, accusing it of helping insurgents and militias here, the largest number of
foreign fighters and suicide bombers in Iraq come from a third neighbor, Saudi
Arabia, according to a senior U.S. military officer and Iraqi lawmakers…
He
said 50% of all Saudi fighters in Iraq come here as suicide bombers. In the last
six months, such bombings have killed or injured 4,000 Iraqis…

I recently suggested that Iraq had the potential to turn into what Spain was at the start of the second World War. Not only was Spain torn apart by what amounted to a three way civil war, each side was being assisted my third countries, with arms and troops. This made the war in Spain much more violent than it would have been otherwise, and it will make the war in Iraq more violent than it would otherwise be. When neighbors fight, they are still neighbors, when foreigners fight they do not have that relationship that might lead to moderation in battle.
Posted by Unknown at 8:58 PM No comments:

Handguns would have prevented 9/11

Hayden Panettiere on Jay Leno
Uploaded by justinvdk
Posted by Unknown at 12:12 AM No comments:

I know this is a little thing really, but I have just hit the 1000 mark on the number of posts that have been tagged "Gossip", "Politics" as usual for the site is trailing a little behind but I am making an effort to bring them more into balance. I want to thank everyone today for reading and being a part of my blog. I love your comments so keep them coming.
Dante
Posted by Unknown at 12:05 AM No comments: