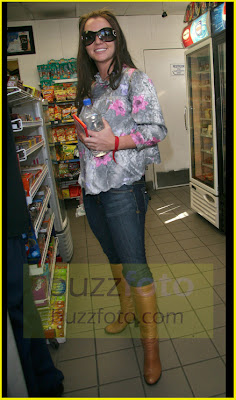 Buzz Foto LLC - Paparazzi Is An Art Form!: "Make Your Subjects Look Perfect"
Posted by Unknown at 11:54 PM No comments:

"A court-ordered sober Britney Spears reportedly applied for a new job on
Thursday...as a bartender. Sources inside the Viceroy Hotel in Santa Monica say
Spears checked in Thursday and at around 10 p.m. went downstairs and started
talking with a bartender. The popstar told the bartender she wanted to do what
he did - then asked for and obtained an application from the night manager to
work in the hotel's Cameo Bar. According to TMZ, the application is currently
with Human Resources."

Could this be a sad sign that rumors of her being broke are true. I wouldn't hire her to work for me, I doubt anyone else will.
Posted by Unknown at 11:52 PM No comments:

Rumorficial: Jen Garner Says 'No Acting for Violet!' at Dotspotter

Rumorficial: Jen Garner Says 'No Acting for Violet!' at Dotspotter:

"Jennifer Garner has banned her daughter from becoming an actress. The
‘Alias’ star insists she and her actor husband Ben Affleck have no desire to see
their 22-month-old daughter Violet follow in their Hollywood footsteps."

Sadly growing up in the spot light like she will, and having the choice herself she will probably be an actor or a singer or a model. You don't see celeb kids becoming non-celebs often.
Posted by Unknown at 11:49 PM No comments:

Lindsay Lohan: “My Talent is a Gift and I’m Going to Use It” | Lindsay Lohan : Just Jared

"Lindsay Lohan has done yet another exclusive interview and “photo shoot”
with OK! Magazine. (Back in August, she was snapped “candidly” reading a copy of
the AA book in rehab.)"

Her talent is a gift, and I believe I am not the only one looking forward to her return to movies.
Posted by Unknown at 11:46 PM No comments:

"Britney was visibly upset as she had to give the boys back to Kevin today. She
handed off Sean and Jayden to KFed's bodyguard in a teary goodbye with her mom
by her side. SO SAD!!!"

I know that Britney and her drama have taken over the blogs lately. Hopefully this is the bottom, she has her mother back in her life, maybe she can move forward and get healthy.
Posted by Unknown at 11:06 PM No comments:

"UNION, Mo. — A former pizza parlor manager was sentenced to life in prison
Monday for the kidnapping of one of two boys he is accused of holding captive in
his apartment."

More of the crazy lady versus J.L.

Is that lady crazy or what? Go JL!

"Some sh*t went down tonight as Britney and her sister attempted to grab a
coffee at Starbucks this evening around 5:30. Brit dropped off her sis to go
inside and order while she looked for a parking spot and when Britney joined
Jamie Lynn inside to pick up their drinks, a psycho woman yelled out: 'We don't
want you here!'"

Just another day in the life of the biggest one ring circus in town, Britney Spears.
Posted by Unknown at 1:08 AM No comments: