"And what about Mr. McCain? Disaster. Who started this rumor that he was a war
hero? Where does that come from, aside from himself? About his suffering in the
prison war camp?"

These comments are wrong, it was wrong when such attacks were directed at John Kerry and it is wrong now against McCain.
Posted by Unknown at 11:51 PM No comments:

This could be a strong pair in the election.
Posted by Unknown at 10:50 PM No comments:

No Ayn Rand for Angelina | CelebWarship

No Ayn Rand for Angelina CelebWarship:

"The couple planned to team up for the film version of Ayn Rand’s novel
“Atlas Shrugged,” but shortly after talks began, Angelina learned she was
pregnant with twins."

This would be a great movie.
Posted by Unknown at 10:44 PM No comments:

Disney Has Already Chosen Its Miley Cyrus Successor, and Her Name is Demi Lovato / Jossip

Disney Has Already Chosen Its Miley Cyrus Successor, and Her Name is Demi Lovato / Jossip:

The push is really on for the next Miley. I don't think this has as much to do with Miley's behavior as it does the drive for a new face.
Posted by Unknown at 10:31 PM 1 comment:

Computer expert: Briton searched for 'how to kill' - Yahoo! News

Computer expert: Briton searched for 'how to kill' - Yahoo! News:

"WOBURN, Mass. - A computer expert has testified that a laptop taken from the
home of a British man accused of killing his wife and 9-month-old daughter was
used to do an online search on 'how to kill with a knife' four days before the
slayings."

This man is as guilty as the come, right up there with Scott Peterson, and Mark Hacking as sick bastards that kill their own wives.
Posted by Unknown at 10:26 PM No comments:

"GAZA (Reuters) - An Egyptian-brokered cease-fire between Israel and
Palestinian militants in the Gaza Strip that could ease a crippling Israeli
blockade of the coastal territory will begin Thursday, Egypt and Hamas
said."

Could this be the break through moment we have been waiting for?
Posted by Unknown at 10:23 PM No comments:

"The Internet firestorm over the Associated Press’s heavy-handed attempt to
bully bloggers over fair use article excerpts has been absolutely
schadenfreude-licious. Now, it’s time to turn the tables."

Blogger Michelle Malkin has turned AP's math against it.
Posted by Unknown at 10:21 PM No comments: 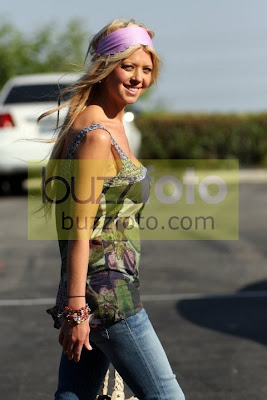 What a beautiful choice.
Posted by Unknown at 10:13 PM No comments:

"Selena Gomez of Disney’s Wizards of Waverly Place, shows off her t-shirt at a
recent photo session and declares that it’s easy being green!"

Someone is clearly trying to get some where in Hollywood and has heard that being "green" is the way to do it.
Posted by Unknown at 10:08 PM No comments:

"I have my own personal nomination for vice president for McCain. It’s Rudy
Giuliani, precisely because he shares the vision of a practical, reforming,
war-winning Republican Party that inspires John McCain, plus the
stronger-than-usual grounds for hoping that he might be the rare candidate who
can make a difference in an essential state — in this case, New Jersey."

If McCain runs with Giuliani, Obama would have to run with Clinton to lose.
Posted by Unknown at 10:05 PM 1 comment:

There is a certain smugness to being too good to developing oil resources that have a small potential to damage our environment, while we consume with abandon resources from parts of the world that are heavily damaging theirs. Which isn't to say that we shouldn't protect our environment, but that we need to take a new look at our place in the world.
Posted by Unknown at 10:00 PM No comments:

More On Solis Doyle: A Slap In The Face To Hillary Clinton - TalkLeft: The Politics Of Crime

More On Solis Doyle: A Slap In The Face To Hillary Clinton - TalkLeft: The Politics Of Crime:

This is a pretty clear sign that Clinton is not going to be the VP.
Posted by Unknown at 9:56 PM No comments:

"HAVANA - Cuban television on Tuesday showed the first images of Fidel Castro in
more than five months, broadcasting a silent video of the ailing revolutionary
chatting in a garden with visiting Venezuelan President Hugo Chavez."

It looks like he really is alive, if he were dead he would look better.
Posted by Unknown at 9:52 PM No comments:

"Tommy Lee has “gone veggie” in a bid to build a new romance with his ex-wife
Pamela Anderson."

Because that is going to make it work this time, right?
Posted by Unknown at 9:49 PM No comments:

"So let’s say your news organization publishes a story about some guy
who’s arrested/charged in a crime. Three months later, he’s acquitted. But when
you Google his name, the original story about his arrest appears at the top. The
story about his acquittal is buried two pages down."

This is going to be a problem that is going to develop, news of a crime always gets more news-hits than a story about a persons crime being dismissed. With Google, the suggestion that the old stories could be deleted doesn't address the problem, when the cached copy will remain on Google's servers. Second if there is a question about which headline to believe regarding a crime, one declares the person is innocent and the other guilty - the average person will assume guilt.
Posted by Unknown at 9:15 PM No comments:

Marginal Revolution: At the Beijing Airport

Marginal Revolution: At the Beijing Airport:

"At the Beijing airport as the customs official questions you, you get to rate
them - there is an electronic box, hidden from their view, that asks for your
rating of service."

Imagine if this were widespread, if there were similar ways to rate all the people that served you in your life, and in you business.
Posted by Unknown at 9:10 PM No comments:

Email ThisBlogThis!Share to TwitterShare to FacebookShare to Pinterest
Labels: China

Posted by Unknown at 9:06 PM No comments:

I think that nuclear power should be discussed, it doesn't have to be the final solution to our energy needs, but it can serve to bring down the amount of carbon based energy we use, while other technology is developed. In the long run, it may even become a part of a mixed basket of energy sources.
Posted by Unknown at 9:02 PM No comments:

"'The AP has an obvious interest in preventing its work from being used for free
by outlets that compete with its paying customers,' says a Los Angeles Times
editorial, 'but it seems to misunderstand how the Internet has changed the way
people find and discuss the news.'"

Just as the music industry didn't understand about file sharing and the reality of MP3s as a form of music that it would be better to embrace than to fight.
Posted by Unknown at 8:58 PM No comments:

"All it took was a few simple questions before nearly half the expecting
students, none older than 16, confessed to making a pact to get pregnant and
raise their babies together. Then the story got worse. 'We found out one of the
fathers is a 24-year-old homeless guy,' the principal says, shaking his head."

I am just in shock, and really don't know what to say.
Posted by Unknown at 8:51 PM 2 comments:

"Keith Olbermann is insane, Chris Matthews is insane, and Tom Brokaw is
ashamed to be anywhere near them. MSNBC is a hilarious train wreck of scurrilous
hobos, one which Brokaw can only defend by describing planets crashing into the
sun, as a good thing, for a hearty paragraph. Also: Tim Russert is dead, and
Keith Olbermann used to date Laura Ingraham."

Wow, Laura did that!
Posted by Unknown at 8:28 AM No comments: