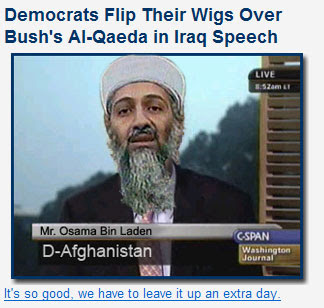 Media Matters - Graphic on Limbaugh's website identified bin Laden as a Democrat
Posted by Unknown at 11:59 PM No comments: 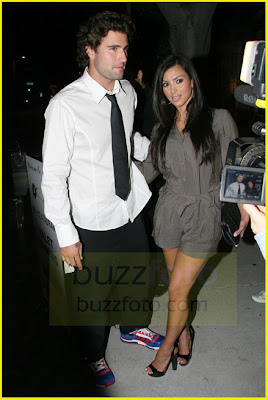 Buzz Foto LLC - Paparazzi Is An Art Form!: "KIM KARDASHIAN & BRODY JENNER at Koi last night"
How does he do it?
Posted by Unknown at 11:57 PM No comments:

"According to the right-wing news website, WorldNetDaily, Fred Thompson has
finally and “candidly” confirmed his membership in the Council on Foreign
Relations, which WND says is sometimes referred to as the “‘shadow government’
organization of elites with a global agenda.” Earlier this week, Thompson was
confronted and questioned by an activist during a campaign stop regarding his
association with the Council, long a bete noir of activists who suspect the
United Nations and other elites of scheming to destroy U.S. sovereignty. The
activist who confronted Thompson, and was eventually forcibly removed from the
event, mentioned the Council’s supposed efforts to bring about the North
American Union, the latest nightmare for Phyllis Schlafly and the
black-helicopter crowd."

While I don't buy into the shadow government, this does serve to show how much of an insider Thompson is. If he is a member of this group, he sits at table with some of the most powerful people in the world. He is not a farmer, he is a lobbyist, he is not an actor though he plays one on TV. He is a political operative, with ties that could have dangerous implications for America.
Posted by Unknown at 11:57 PM No comments:

Has Hilary learned nothing from watching the Nicole, Lindsay and Paris train wrecks. Does she want to be the next underage starlet that is getting locked up for a DUI?
Posted by Unknown at 11:52 PM No comments:

"The station is still under construction so no one has seen KUNT Action News as
of yet--or maybe it's KUNT On Your Side. The other station is KWTF in Arizona.
Now, this one I like. I think I'd keep it. I'd make my motto, 'Hey! KWTF is
happening in Arizona!'"

That is great, I would love to watch KWTF, and you know you can always trust KUNT to be a good source for something at least. I wonder if the FCC will see the mistake it made and change the call letters.
Posted by Unknown at 11:49 PM No comments:

Posted by Unknown at 3:38 PM No comments:

Posted by Unknown at 3:34 PM No comments:

Don't run from the CNN/YouTube debate

Posted by Unknown at 3:14 PM No comments:

Ruins of Empire #22: The Internet Bubble

Click To Play
Posted by Unknown at 1:35 PM No comments:

Click To Play
Posted by Unknown at 1:26 PM No comments:

Jennifer Lopez on Regis and Kelly

Jennifer Lopez
Uploaded by JeanneDupuis
Posted by Unknown at 12:39 PM No comments:

Does Bono's Wife Know About This?

A Socialite's Life: Does Bono's Wife Know About This?

"For the U2 frontman, 47, Spanish actress Penelope Cruz, 33, and model Helena
Christensen have been spotted walking hand-in-hand along a Saint Tropez beach.
Cruz and Bono were also snapped leaving the exclusive VIP Room nightclub in
the French Riviera. Holding hands as they exited the club they cosied up and
seemed lost in conversation as they were driven away. "

Do you think Bono is cheating on his wife? Could this just be a close friendship between the two. I have to say that if it weren't Bono, I would already be thinking that something was going on. Bono doesn't seem like the kind that would openly cheat on his wife though. I guess we will see.
Posted by Unknown at 12:35 PM No comments:

A Socialite's Life: Richie Gets Four Days In The Big House

"A court commissioner sentenced Richie to serve four days in the City or
County Jail (her choice!) -- she got credit for a fifth day, for the six hours
she served after being busted.Richie was also fined $2,048, was ordered back to
school for 21 days to an alcohol education course and on three years probation.
Richie must report to serve her time by September 28. "

This is a pretty harsh slap on the wrist for poor Nicole. Imagine the pain of having to spend four days in jail. It isn't like she was caught with a blood alcohol level that barely broke the law - at .08. All poor Nicole did was get high on pot and pills and drive the wrong way down the freeway. I mean what is the worst that could happen, someone could have been killed. Those judges in LA sure know how to throw the book at someone.
Posted by Unknown at 12:17 PM No comments:

Posted by Unknown at 2:48 AM No comments:

"“Right now, we have no reason to believe that his stories are anything
other than what we first suspected them to be: a ‘pastiche of the ‘This is no
bullshit . . . stories soldiers like to tell.’” That’s The Weekly Standard’s
response to the self-outing of Scott Thomas Beauchamp, otherwise known as The
New Republic’s “Baghdad Diarist” whose Iraq war accounts have been, let’s say,
“questioned.” As the solider tells it: “My pieces were always intended to
provide my discrete view of the war; they were never intended as a reflection of
the entire U.S. Military. I wanted Americans to have one soldier’s view of
events in Iraq.”"

While the identity of the blogger has been revealed, the stories that he has written are still being attacked by the right. The stories I have heard about involved in this, do sound like they might be fiction, or perhaps they are based on true stories. For example one story is about a soldier who used a child's skull as a hat for a full day, perhaps it was a real incident where it was play with for a few moments, and the author expanded on the truth. On the other hand, there is a well known story of NATO troops that found a skull and used it as a toy, so it could have been the author localized that story.
Posted by Unknown at 2:46 AM No comments:

Posted by Unknown at 2:21 AM No comments:

Paris Hilton on the Simpsons

Posted by Unknown at 2:20 AM No comments:

Homer Simpson on the Tonight Show

"Britney Spears has added to the legal problems she’ll likely face after going
on the run with tykes Sean P. and Jayden J in tow. Brit has checked out of the
Las Vegas Wynn Hotel after her bodyguard Julio “JC” Camera punched out a
photographer in front of the spa after-right in front of two year old Sean, who
was actually struck during the melee!"

I feel bad only for the child in this mess. The photographer no doubt deserved the beating that he got, while Britney seems to do everything she can to get the cameras on her. She should not be given custody of the children alone, and from what I hear she might not be given that right again after this illegal trip across state lines. You see, part of the custody agreement between her and Kevin says that one parent cannot take the children across state lines without telling the other. It is being reported that he was pissed when he learned that the kids had gone to Las Vegas with her.
Posted by Unknown at 2:16 AM No comments:

"Dina Lohan is one person who was not amused by Rob Schneider's guest appearance
on the Tonight Show with Jay Leno Tuesday – during which he dressed as Lindsay
Lohan. "

She either needs to learn how to take a joke and understand that is a part of living the life that her daughter has choose, or she needs to stop being an attention whore. I think it is a little bit of both.

Listen Dina, right now you need to get off the phone with the media, and take care of Lindsay. Sending her a text message a day is not being a parent to her. Right now she needs you to worry about her and not for you to be worried about Jay Leno.
Posted by Unknown at 2:12 AM No comments: 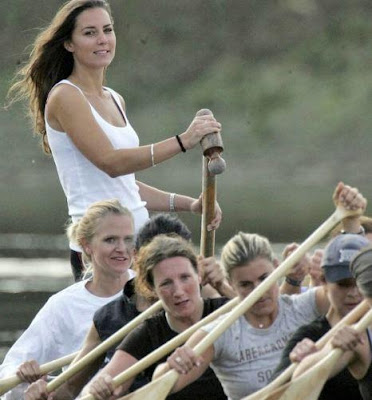 "The on/off-girlfriend of Prince William is hoping to break a Guinness world
record by being among the first all-female crew to row across the English
Channel for the charity race in a Chinese dragon boat. That’s pretty cool
actually."

She really is very beautiful, it would be good to see it work out for them.
Posted by Unknown at 2:07 AM No comments:

"If three prominent articles in the Treason Times isn't enough to convince
Hillary that Bush won the 2000 election, forget the White House: ABC ought to
hire her to replace Rosie O'Donnell on 'The View.' I know that's a big seat to
fill, but maybe she can finally convince Elizabeth Hasselbeck that 9/11 was an
inside job. "

I think that if this run for the White House doesn't work out, and she has the time in her schedule she should look into being a member of The View. Hillary is a smart womyn and I think that her ideas would add some real depth to the show.
Posted by Unknown at 2:03 AM No comments:

"Newt Gingrich's long, slow striptease over whether he will seek the presidency
in 2008 looks like it might come to an unexpected conclusion: a date with Fred
Thompson. "

That would be an interesting ticket to watch, not to vote for, but to watch. It would be like the drunk girl at the bar that is more fun watching than taking home.
Posted by Unknown at 2:00 AM No comments:

Lindsay Lohan: ‘I Can Do Whatever the F**k I Want’--Bumpshack.com

Lindsay Lohan: ‘I Can Do Whatever the F**k I Want’--Bumpshack.com:

"Dante says he tried to grab the wheel, prompting Lindsay to say, “If you touch
me I’ll sue you.” Jakon says they pleaded with her to stop.
They say at one point, Lindsay boasted, “I can’t get in trouble. I’m a celebrity. I can do
whatever the f**k I want.”
He says Lindsay responded, “I’m a celebrity. I’m not going to get in trouble.”
When police arrived, Dante says it seemed as
if Lindsay told officers, “I wasn’t driving. The black kid was driving.”
Dante says Lindsay was never without a drink during the evening and he even
did a shot with her.
Ronnie says Lindsay looked “very messed up” and “raging.”
Dante and Jakon say they saw Lindsay flunk the field sobriety
test. They say when she tried touching her nose, she almost fell over."

The black kid was driving, yeah not the right thing to say Lindsay.

Well there goes her I wasn't driving defense, unless there is a good reason for these men to lie, which I don't see, the story that they tell makes it look worse than we had imagined.
Posted by Unknown at 1:56 AM No comments:

"Hollywood stars Liev Schreiber and Naomi Watts are celebrating after the
actress gave birth to their first child - a week earlier than expected,
according to U.S. reports."

Congrats to them and their new family.
Posted by Unknown at 1:49 AM No comments:

Mitt Romney Is Right - TalkLeft: The Politics Of Crime

Mitt Romney Is Right - TalkLeft: The Politics Of Crime:

"'I think the presidency ought to be held at a higher level than having to
answer questions from a snowman.'"

Dear Mitt, I see how you might think that looking down your nose at Americans and the way they choose to express themselves will get you elected to the highest office in the land. Wait, actually I don't see how you think that being rude is going to get you elected.
Posted by Unknown at 1:34 AM No comments:

Headlines on the Daily Show

Bill vs DailyKos on the Colbert Report

Posted by Unknown at 1:09 AM No comments:

Posted by Unknown at 1:03 AM No comments: