"Katie Holmes was seen wearing the Singelringen . A ring typically worn to
signify the wearer is single. Did she finally dump Tom Cruise???
I am sure
Tom would say that there is some Scientology meaning behind this particular
ring. "

I don't know, it is probably just a ring, but it would be great news to hear that she had broken out of the cage of a marriage she is in.
Posted by Unknown at 11:58 PM 1 comment:

"Instead, recent news about this son of Rod Stewart is focused on the fact that
he’s being sued and now arrested for allegedly launching a brutal brick-throwing
attack on a couple on April 23."

This is a story that hasn't gotten a lot of coverage in the blogs. Turns out that while his daughter is out about town in whack outfits. His son is out on the town whacking people in the face with bricks.
Posted by Unknown at 11:55 PM No comments:

Al Pacino to Dance with the Stars? - Al Pacino : People.com

Al Pacino to Dance with the Stars? - Al Pacino : People.com:

I thought this show was for losers.
Posted by Unknown at 11:52 PM No comments: 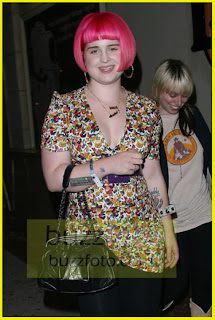 Buzz Foto LLC - Paparazzi Is An Art Form!: "Kelly Osbourne Has Pink Hair! Do You Love It???"
Posted by Unknown at 10:42 PM No comments: 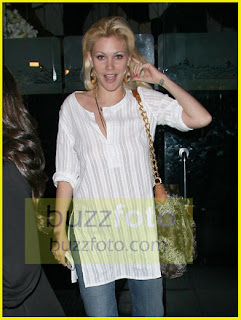 Buzz Foto LLC - Paparazzi Is An Art Form!: "A Quick Chat with Shanna Moakler"
Posted by Unknown at 10:40 PM No comments:

The Hoff Got The Kids

A Socialite's Life: The Hoff Got The Kids

"After randomly proclaiming today 'a beautiful day to go the beach,' Hoff told
the media, 'The judge said today 'enough, enough is enough, these children have
been through enough.'' Hoff then discussed his beach plans, and never one to let
an opportunity slip through his fingers -- used the attention to plug 'America's
Got Talent.'"

I hope for the kids that this will be the end of their family troubles. The mother must have been really crazy for the judge to grant custody to The Hoff.
Posted by Unknown at 10:39 PM No comments:

"We had to ask the question that's on everyone's mind when we ran into
Nicole Richie on Melrose yesterday - is she or isn't she? Unfortunately, Nicole
chose to keep her lips zipped rather than respond to the question, as did Joel
Madden when we ran into him a little later in the day. Oh well - a girl as small
in stature as Nicole's going to tip her hand one way or the other!"

There has been a lot of talk about Nicole being pregnant. I don't think she can be though. She hasn't been seen with her boy Joel for a while. I don't think that she is healthy enough to even get pregnant. Why would she allow herself to get pregnant. It is more understandable that it she has just increased her weight.
Posted by Unknown at 10:21 PM No comments:

Posted by Unknown at 1:50 AM No comments:

Palast on the Randi Rhodes show on Vultures

Posted by Unknown at 1:34 AM No comments:

"The non-partisan Center for Rural Strategies was founded to try and keep
rural issues visible in elections that sometimes seem to focus only in the
cities that host $2000 a plate dinners and 50,000 person stadiums. Since the
Kentucky-based group was founded, one thing has been consistently true in the
results of their polls of rural voters -- America's small towns and countryside
have been running red. However, it seems that may be at an end. "

This really is bad news for the Republican Party. If it loses the rural areas, it will be like when the Democrats lost the south, just worse. I think that the reason that the rural areas are being lost is the move away from being the party that supported hard work, and believed in low taxes and small government. I think that rural people more than others understand the value of their work, and want to keep as much of their money as they can. At the same time they question why someone else should get by with a free lunch. Also being more removed from government services, they do more of those services for themselves - garbage, sewer, water, as such they want to see the government smaller and to leave them alone more.

The party has moved away from this base, towards more of the religious concerns. These religious concerns are felt by rural people, but I believe they feel it in a more live and let live attitude.
Posted by Unknown at 1:27 AM No comments:

FOX News Throws Stones From Their Glass House At Jolie

"Only someone who never wore the uniform or thought seriously about national
security would make threats at this point. What our soldiers need is responsible
strategy, not a further escalation of tensions in the region. Senator Lieberman
must act more responsibly and tone down his threat machine…"

There have been a number of comments on Lieberman's talk of bombing Iran. I think this is a strong comment from a good source. Talk of war with Iran should not be done lightly.
Posted by Unknown at 1:13 AM No comments:

Crooks and Liars » Say, what?

Crooks and Liars » Say, what?:

Why even open your mouth if this is what is going to be coming out of it?
Posted by Unknown at 12:53 AM No comments:

Crooks and Liars » The Myth of the Conservative movement

Crooks and Liars » The Myth of the Conservative movement:

"For anyone interested in where the American public really stands on the big
issues that distinguish progressives from conservatives — including the issues
at the forefront of today’s political debates — “The Progressive Majority: Why a
Conservative America Is a Myth” offers hard facts and analysis based on decades
of data from some of the nation’s most respected and nonpartisan public opinion
researchers…."

The majority of people I have met in my life lean to the more progressive side than the conservative side of key issues. Even on the issue of gay rights the majority of people I know, some of whom believe that homosexuality is wrong, don't think that they should be discriminated against. I think that this comes in part from a basic American attitude of what does it mean to me. When you talk about abortion, I think that a lot of people are of the mind that they don't see a reason to fight against it because it doesn't effect them. When you talk to them about gay rights, there is an assumption that if they aren't hurting anyone they should be left alone.

"Senate Majority Leader Harry Reid called Marine Gen. Peter Pace, the
outgoing chairman of the Joint Chiefs of Staff, 'incompetent' during an
interview Tuesday with a group of liberal bloggers, a comment that was never
reported. "

Pace should have replied something to the effect of. You're an incompetent Senate leader, the difference between me and you is that you couldn't handle my job, but I could do yours. I don't want to get into this too deeply, just that I don't think that it is right for name calling of this type to be taking place between congress and the armed services. The war in Iraq has gone poorly, but I don't know that it can be put on any one persons shoulders.
Posted by Unknown at 12:29 AM No comments:

"The Justice Department is investigating whether Attorney General Alberto
R. Gonzales sought to influence the testimony of a departing senior aide during
a March meeting in Gonzales's office, according to correspondence released
today...."

I have real fears about the growing climate of scandal in Washington. The public has limits to what it can handle in terms of scandal, or anything else really. Mind that I am not talking about what the public can accept, but what the public can handle. These terms do not mean the same thing. It is my belief that when as the scandals become too much for the public in general to handle, they just start to accept the scandals as being reality. The end result is that the population begins to distrust the institutions of government and assume that those sent to Washington to speak for them are acting corruptly. This means when news breaks of a new scandal, it isn't something shocking to them, and often is something they don't want to know about.
Posted by Unknown at 12:18 AM No comments:

"A 2003's 'Soldier's Guide to the Republic of Iraq,' issued by the
Army on the eve of the U.S. invasion, tells troops that Arabs see 'little virtue
in a frank exchange' and are 'by American standards... reluctant to accept
responsibility.'"

I think that when it comes to guides like this it is a catch-22. If you don't hand out a guide to the soldiers there will be claims that moves were not taken to understand the population. On the other hand, it is hard to write a description of a single person, a group or a nation is that much harder. There will always be mistakes, or points that are unclear enough to be misread. The effort in my opinion is the key, we are seeing a meeting of cultures, and there is always some misunderstanding at such times.
Posted by Unknown at 12:07 AM No comments: