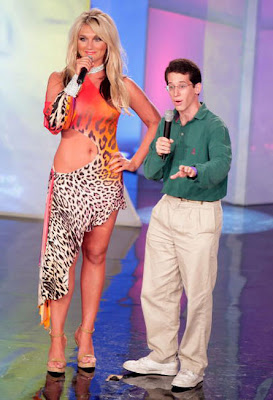 This whole picture is making me want to be sick. This dress is beyond ugly.
Posted by Unknown at 11:59 PM No comments:

" Alicia Silverstone, (born October 4, 1976) is an American actress and former
fashion model. She first came to widespread attention in music videos for
Aerosmith and later starred in Hollywood films such as Clueless and Batman &
Robin."

Happy Birthday Alicia.
Posted by Unknown at 11:57 PM No comments:

"Jennifer Lopez, wearing her flowing top from the 60’s, accidentally allowed her
baby bump to escape while performing. The hand supporting it, is a nice touch."

She has a baby on board for sure.
Posted by Unknown at 11:56 PM No comments:

Happy Birthday Kate...
Posted by Unknown at 11:53 PM No comments:

"DETROIT, Michigan (October 5, 2007) – A radio station in Detroit is under fire
for promoting a contest encouraging listeners to predict the day Britney Spears
is going to die."

This is just sad.
Posted by Unknown at 11:53 PM No comments:

"Lindsay Lohan has officially left rehab! People Magazine is reporting that she
checked herself out of the Utah rehabilitation center which she called home for
over a month. A source reveals to the magazine that although she is done her
program she may return for outpatient care."

Most importantly I hope that she is ready to leave. I have missed her being in the news, hopefully she will be able to come back and get some good news going for herself. I am rooting for you Lindsay. Please give the world something more interesting than Britney and a flat tire.
Posted by Unknown at 11:47 PM No comments:

"Another violent public row and a poor performance at London's Music of Black
Origin (MOBO) awards has caused the British singer to consult lawyers to make
their split official and find out how much Blake would be entitled to' in a
divorce settlement, Sun UK reports "

I haven't been following this mess for a while, so I don't know what is going on with it. I have my doubts that they are going to get a divorce, it is one of those things I need to see to believe.
Posted by Unknown at 11:25 PM No comments:

Published for the first time: Coroner releases amazing pictures of Diana in the car that took her to her death | the Daily Mail

Published for the first time: Coroner releases amazing pictures of Diana in the car that took her to her death the Daily Mail:

"An astonishing sequence of pictures of the final minutes of Princess Diana's
life have emerged as the long-awaited inquest into her death finally opened
today. "

Click on the link to see the amazing photos.
Posted by Unknown at 11:15 PM No comments:

A Socialite's Life: Kim Kardashian Needs To Cover That Ass

"The sisters, who will star in E!'s 'Keeping Up With the Kardashians' this
fall, are identified as being in nude pictures that were offered for sale to
media outlets yesterday. The women are also seen in sexual poses with a naked
man. But while Kim is 27 and Kourtney is 28, sources say the pictures were taken
11 years ago, when they were teenagers."

Naked pictures of Kim and her sister. I don't know that much about her sister, but it honestly wouldn't shock me too much to find out that Kim was behind the release of these pictures. Not that I mind, I only hope they leak out soon, so we can all get a look.
Posted by Unknown at 11:07 PM No comments:

"'What crossed my mind...they knew I was walking into a big book party. It just
shows you that with these guys it's all just smoke and mirrors. It's all PR and
spin. And that's what I write about in my book. So I'm not surprised that they
used this opportunity. This is par for the course for these characters.'"

Of course this is all about being in the public eye and getting attention. Everyone by this time knows that the best way to deal with a story like this, if it isn't true, is to let it die. Even if it is true, but you want it to go away, just stop talking about it. They will do anything for media.
Posted by Unknown at 11:03 PM 1 comment:

This would be a better story if there was a video and some jello involved.
Posted by Unknown at 10:56 PM No comments:

"i actually witnessed this incident... i watched the photographers throw juice
on the bystander when she asked to please move out of her way..then she threw
her tea back at the man....which landed on brittneys car..this poor woman was
trying to leave in her car....after being mocked by photographers the 120 pound
woman was throwed to the floor by a man..then police chased down the
photographer and handcuffed him on the side of the road, .... the photographers
have no regard for the public ...... my son and i stood there with our mouths
open while photographers abused a woman who was trying to get into her car which
was being blocked by 55 photographers taking pictures of the darked out car that
spears was driving..,.this is fact."

This is all getting disturbing. There is going to be a public reaction to this at some point. It could damage the whole celebrity focused industry, not just the few who are immature. The tides are getting to the point, that you know something has to start pushing back, someone is going to start demanding that there be some control put on this. I don't see how the public will continue to put up with it, or how the the government can control it.
Posted by Unknown at 10:45 PM No comments:

Jessica Simpson Puts on a Smile For Operation Smile

A Socialite's Life: Jessica Simpson Puts on a Smile For Operation Smile

I had my doubts about her interest in this when she went to Africa during her marriage to Nick. It looks like something that she really cares about. It might not be what you think is the most important thing, but I think it is good that it is something outside herself, something bigger that she cares about. I bet it means a lot to the people that are helped.
Posted by Unknown at 10:28 PM No comments: