"Sunni militias that once fought U.S. troops are now seeking to join
them, frustrated by al Qaeda’s influence in parts of Baghdad, a U.S. commander
said on Friday.
Maj. Gen. Joseph Fil, commander of U.S. forces in Baghdad,
said working with the militias compensates for insufficient Iraqi police
presence in some neighborhoods.
“Some of them who have previously been
fighting us have come to us as we’ve spoken with them and they want to fight
with us,” Fil said."

"Why not open up a Medical Free Trade Zone in, say, Detroit? Health care workers
in the zone would not be required to get US visas or licenses, and any
malpractice claims would be resolved in the courts of the worker's home
country."

There has been a big movement lately, of people going to other countries like India to get medical service, because it is cheaper to do so. This idea is constructed on that idea, but with the additional twist of making it easier for those who can't travel to India. Why not bring the doctors to a "free trade zone", and let them meet customers needs, operating under the same rules that they would if were still in their home country. The customers would of course need to be alerted to this, and made clear of what their rights were and were not, but many would be willing to accept the risks to save money.
Posted by Unknown at 12:42 PM No comments:

"TAMPA — When a 42-year-old registered sex offender answered the door naked and
acting nervous during a surprise check by cops, the officers acted on suspicion
and searched his home.
What they found next was a 15-year-old girl in Robert
Gomez's bed, according to MyFoxTampaBay.com."

I think there needs to be a national three strikes law for sex offenders. First strike is jail time, I don't think that everyone who commits one sex crime is a sex offender though. Second strike, jail time and monitoring programs, with a system to keep them away from victims. The third strike, send them to a special confinement for sex offenders of never release them, they are not going to change, they are just going to continue to hurt others.
Posted by Unknown at 12:39 PM No comments:

Pelosi not Willing to Protect the Constitution

OMG, This Baby Is Doomed! Nicole Richie IS Pregnant!!!

poponthepop.com: OMG, This Baby Is Doomed! Nicole Richie IS Pregnant!!!

"TMZ has independently confirmed that Nicole Richie is pregnant.The starlet has
been dating Good Charlotte frontman Joel Madden for over six months. Rumors have
been swirling for months that Richie and Madden were expecting, but TMZ has
confirmed through several sources that she is, in fact, with child."

Wow, I really doubted these rumors when I first heard them, but it would appear that they are true and that Nicole is going to give birth. I can't imagine what kind of life that poor child has to look forward to. There are also rumors that she and her man toy Joel (Hillary wouldn't let me knock her up) Madden are getting married this summer.
Posted by Unknown at 12:07 PM No comments: 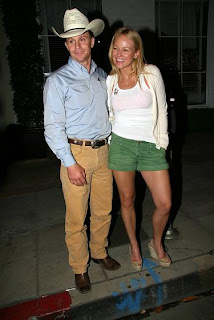 dailystab.com Hot Celebrity Gossip: "Jewel With Her Boyfriend In Hollywood "
She is still looking good, but she needs to put out some new music.
Posted by Unknown at 11:18 AM No comments:

"Love It Or Hate It"

A Socialite's Life: "Love It Or Hate It"
I LOVE IT! I think it adds to her natural curves well.
Posted by Unknown at 11:17 AM No comments:

Posted by Unknown at 3:30 AM No comments:

Posted by Unknown at 3:29 AM No comments:

"'Today the House of Representatives affirmed that freedom will continue to
reign on the airwaves of America. Thanks to the support of 308 of my colleagues,
Congress has ensured that the Fairness Doctrine will remain in the grave for
now. This was a resounding victory for free speech. "

I think that this doctrine is pointless. If radio was the only source of news, there would be some foundation for this. However new sources abound, the internet is the largest source of news right now. There is also an abundant selection of news channels and newspapers that are available. I don't think that the goal of this bill is conductive to free speech in the current political and media environment.
Posted by Unknown at 3:26 AM No comments:

Posted by Unknown at 3:22 AM No comments:

Patrick Fitzgerald Weighs In on Scooter Libby Commutation - TalkLeft: The Politics Of Crime

Patrick Fitzgerald Weighs In on Scooter Libby Commutation - TalkLeft: The Politics Of Crime:

"We comment only on the statement in which the President termed the
sentence imposed by the judge as “excessive.” The sentence in this case was
imposed pursuant to the laws governing sentencings which occur every day
throughout this country. In this case, an experienced federal judge considered
extensive argument from the parties and then imposed a sentence consistent with
the applicable laws. It is fundamental to the rule of law that all citizens
stand before the bar of justice as equals. That principle guided the judge
during both the trial and the sentencing. "

Posted by Unknown at 3:21 AM No comments:

Oh the possibilities are endless - AMERICAblog: A great nation deserves the truth 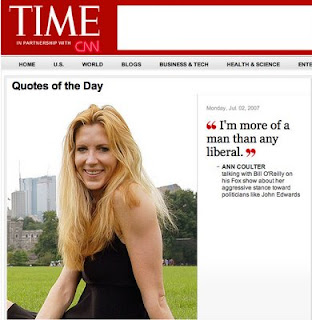 "“But I like it when somebody expresses their view with clarity and force,” she
said. “It was Nietzsche or Kierkegaard who said you have to believe in something
so strongly that you don’t acknowledge another’s point of view: That’s what real
belief is.”"

While it is true that you can express yourself with vigor and force and not be abusive, I think Edwards has a larger point that is true here. There are two dangers in the political conversation, the first is that it will become heated with strong opinions. The second is that it will be stale, and not allow strong opinions. Honestly it is the second that I fear the most. Honest and open discussion is what we need for our system to operate, and sometimes honest and open is offensive.
Posted by Unknown at 3:13 AM No comments:

"Otherwise, pro-immigrant organizers will begin a campaign “aimed at bringing
this government and this economy to a halt.”"

This is language that I don't like to hear coming from an American citizen, and to be honest, I think immigrants have even less language to use. They are guests in our country, and while I think they should be treated better than they are, they have no right to threaten the government. This borders on an act of terror in my mind. It is also language like this, that makes it hard for me to support groups working to legalise immigrants. I just think it is a dangerous and unproductive tone.
Posted by Unknown at 3:08 AM No comments:

Statement by the President On Executive Clemency for Lewis Libby

Statement by the President On Executive Clemency for Lewis Libby:

"This case has generated significant commentary and debate. Critics of the
investigation have argued that a special counsel should not have been appointed,
nor should the investigation have been pursued after the Justice Department
learned who leaked Ms. Plame's name to columnist Robert Novak. Furthermore, the
critics point out that neither Mr. Libby nor anyone else has been charged with
violating the Intelligence Identities Protection Act or the Espionage Act, which
were the original subjects of the investigation. Finally, critics say the
punishment does not fit the crime: Mr. Libby was a first-time offender with
years of exceptional public service and was handed a harsh sentence based in
part on allegations never presented to the jury.
Others point out that a
jury of citizens weighed all the evidence and listened to all the testimony and
found Mr. Libby guilty of perjury and obstructing justice. They argue,
correctly, that our entire system of justice relies on people telling the truth.
And if a person does not tell the truth, particularly if he serves in government
and holds the public trust, he must be held accountable. They say that had Mr.
Libby only told the truth, he would have never been indicted in the first
place."

Click on the link to read the full statement.
Posted by Unknown at 3:04 AM No comments:

Posted by Unknown at 2:28 AM No comments:

Posted by Unknown at 2:23 AM No comments:

Posted by Unknown at 2:14 AM No comments:

Posted by Unknown at 2:09 AM No comments: 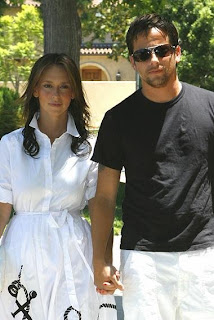 dailystab.com Hot Celebrity Gossip: "What Is She Wearing?! "
Love, you are so beautiful, why are you wearing this ugly dress?
Posted by Unknown at 2:04 AM No comments:

"We've been promising video of Britney's night out at Les Deux with her new man
- and, much like Britney herself, we're not one to leave our fans hanging! We're
still trying to ascertain the details, but in the meantime, check out the guy in
the black hat by Britney's side - could this be Britney's rumored 'wealthy older
man'?"

Maybe it is someone who can keep her in line.
Posted by Unknown at 1:56 AM No comments: 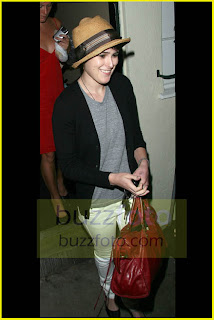 Buzz Foto LLC - Paparazzi Is An Art Form!: "RUMER WILLIS at Il Sole in West Hollywood last night"
Posted by Unknown at 1:27 AM No comments:

Posted by Unknown at 1:23 AM No comments: