WHAT I MISSED.net: Paris' Music Career Over?

WHAT I MISSED.net: Paris' Music Career Over?:

"Paris Hilton has been dropped by her record label after her CD was a
flop. Paris' record label reportable forked over $250,000 for her 'Stars Are
Blind' video (below); and are upset with her CD selling less than 500,000
copies. Warner Brothers released this statement, 'We are not expecting any new
Paris Hilton material in the foreseeable future.' "

She gave it a try and it looks like it didn't work. There may be music deals with other companies in the future of course.

Oh and good luck in jail by the way Paris.
Posted by Unknown at 11:03 PM No comments:

"In this case, they're going after an Iraq war vet for wearing camouflage
fatigues during a mock patrol protesting the war that took place in DC in March.
Wearing camo? Funny that the Bush administration uses active and former
military, in uniform, at practically every political event they hold, but the
Pentagon has no problem when it's the Republicans using our troops for political
purposes.

Remember when Colorado Republican House member Marilyn
Musgrave had active-duty troops in uniform at a political event during her
re-election? I didn't hear about those service members being in trouble.
Remember when Bush did it in the White House a few months back (see photo at
left), he had a whole crew of folks in uniform behind him at a terribly
political event mean to bash Democrats over the war. The presence of uniformed
American military at an event meant to declare Democrats unsupportive of our
military implies that the military brass believes that Democrats are
unsupportive of the military. That's a huge declaration for a country in which
the military is supposed to be subservient to the political leadership, and not
the other way around. Not a word about any of them facing charges either. The
simple fact is that there are two standards of law in America (that's a
violation of Equal Protection under the Constitution). One for Bush and company
and one for the rest of us. And our military leaders have been just as corrupted
by politics as the rest of the administration."

Not only do I not believe that either party has the moral high ground to talk about supporting the troops. I think that this constant battle back and forth between the two parties makes them a pawn in the political system. If you support the troops then bring them home, has some truth to it. It is true that if the war were over the number of troops dying would stop. If you support the troops support the battle that they gave or are risking their lives for. This also has some truth. Ideally we would never have to send our young men to die in war. However we do not live in an ideal world and this debate about how to support the troops is a back door attempt to attack the war on one hand. On the other it is a back door attempt to attack those who oppose the war. When both sides are using the backdoor for its coming and goings how is the American public supposed to understand what is going on in Iraq.
Posted by Unknown at 10:17 PM No comments:

"Four men have been charged with conspiring to attack John F. Kennedy
International Airport by planting explosives to blow up jet fuel supply tanks
and a pipeline, officials said.
Homeland Security sources said there is no
current threat at the airport and that the attack as planned was 'not
technically feasible.'"

Before this gets ugly, I want to say that if lives have been saved and those who would commit attacks against innocent civilians are arrested - this is good news.
Posted by Unknown at 10:07 PM No comments:

" The online dating service was founded by an evangelical and had close early
ties to the lead religious right activist organization Focus on the Family. And
now they're being sued for excluding gays. I suspect the suit is based on local
public accommodations laws, which include sexual orientation in numerous places
around the country (i.e., you aren't allowed to turn away customers just because
they're black, women, etc.) I remember when we were taking on Sandals, the
previously virulently anti-gay Caribbean resort. An ACLU lawyer at the time told
me that they could potentially be held liable under a public accommodations suit
in any city in which they seek customers so long as the city (or state) includes
sexual orientation in its public accommodations law. And I can't wait for the
evangelicals to try to argue that their dating service is really a church."

I support gay rights, but that also means I support their right to form their own dating services online. Forcing yourself into a service that doesn't want you seems just silly. What is the result they are after, are they after a monetary gain, if so how are they going to show damages. If they are after forcing the site to open itself to gays, gays would be entering a site that was unfriendly to their being there. I am not going to argue that this is a church, but it is more like a social group. Does the government have the right to force membership in a social group.

Form your own site, they lose your money and you get a site that is actually concerned about gays. Even if the site allows gays on to it, no one can make the site care abut gays and their special concerns.
Posted by Unknown at 10:06 PM No comments: 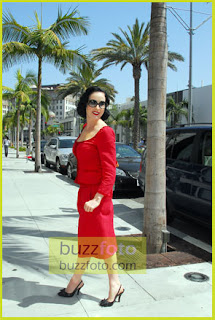 Buzz Foto LLC - Paparazzi Is An Art Form!: "Dita Von Teese is a Knockout"
Posted by Unknown at 8:47 PM No comments: 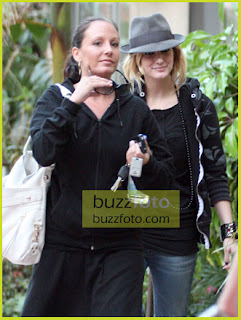 Buzz Foto LLC - Paparazzi Is An Art Form!: "Ashlee Simpson & Her Mom — How Cute is that Fedora?"
Posted by Unknown at 8:47 PM No comments:

Biden scolds other Dems for bowing out of debate - Boston.com

Biden scolds other Dems for bowing out of debate - Boston.com:

I think it is a mistake for Democratic candidates to not take part in the debate on Fox News. One, do they think that some of their party members do not watch Fox News. Do they think that they can reach the White House by reaching out to the other side. I don't know that Fox News is balanced, but that is besides the point, it could be more useful if it is slanted to the right. It may be that there are people on the right who only watch Fox News, and will not get your message any other way.
Posted by Unknown at 8:43 PM No comments:

"Sofia Coppola and Romy took advantage of the beautiful weather in NYC and took
a stroll around downtown. I think these are the first pictures I’ve seen of her
daughter. She is simply adorable. Click on the thumbnails below to enlarge each
picture"

A beautiful womyn that often gets over looked by the media. I am sure she would rather be left alone to make her movies though.
Posted by Unknown at 8:28 PM No comments:

"Lindsay Lohan’s rumored lesbian lover, New York City DJ Samantha Ronson, has
reportedly been setting her GF up in exchange for some cash from the paparazzi.
Celebrity snitches are dishing that SR has been tipping the paps off to where
LiLo may be. Tattles are also whispering that Samantha may have planted the
cocaine police found in Lindsay’s car following last Saturday morning’s Curb
Meets Mercedes Accident in the Hollywood Hills."

It would be sad if this is true, that someone would sell out someone that they claimed to be friends with for money. I am sure that in all these Hollywood friendships there is a certain about of leakage to the press for money. However to whole sale set someone up, when you know that they are drunk and at a hard spot in their life is just wrong.
Posted by Unknown at 8:26 PM No comments:

Gabby Babble: Katie Holmes is Desperate For Another...

Gabby Babble: Katie Holmes is Desperate For Another...:

"'We're having the best time, it's so amazing. We have so many kids in our
house, there's always this wonderful chatter and the great noise of kids. He's a
great father and so it came to no shock that when we had Suri he was amazing
with the baby.' "

Reportedly Katie is desperate to have another baby. Could this be a sign of weakness in the relationship between her and Tom. Often children are used as a way to try and strengthen a weak bond. The only problem with this case, is that Tom already has two children with Nicole Kidman and might not stay with Katie for the kids. Besides which, I am sure he would be fighting as hard as he could for sole custody if their is a split.
Posted by Unknown at 8:21 PM No comments:

"Lately so many celebs are seen wearing high waisted pants. Check out
Jessica Simpson and Mischa Barton and now Nicole Richie. All I can ask is
why???? Don't they look in the mirror before buying these high waisted pants?"

For those of you who haven't noticed yet, the waist line is moving north again. The hanging your pants around your knees and letting your ass hang out look is done. I think the higher waistlines look good. Nicole Richie is only the latest of Hollywood's trend setters to wear high waisted pants.
Posted by Unknown at 8:16 PM No comments:

Brad and Angelina on Hidden Cam

B Clinton on Hidden Cam

Posted by Unknown at 8:09 PM No comments: