Posted by Unknown at 5:39 PM No comments:

Lily Allen Loves The Attention While She Shops On Friday

Posted by Unknown at 5:34 PM No comments:

Obama Chickens Out On Appearances With McCain

Lost Remote » Who at IB posted Russert’s death on Wikipedia?

Lost Remote » Who at IB posted Russert’s death on Wikipedia?:

"The first place to report the news of the death of Tim Russert wasn’t NBC - or
the New York Times… it was likely Wikipedia. Someone edited Russert’s entry at
3:01pm ET - a full 23 minutes before Drudge, NYT and the NY Post picked up the
story. NBC broke into programming on the network and on MSNBC at 3:39pm ET."

Get your breaking news at Wikipedia....
Posted by Unknown at 12:26 PM No comments:

Posted by Unknown at 3:03 AM No comments:

Posted by Unknown at 2:57 AM No comments:

"McCain's problems still leave him walking a tightrope. He needs evangelical
voters, but also needs to retain his appeal to the more moderate middle ground.
McCain was recently forced to renounce the endorsements of two religious leaders
because of their past extremist statements on Islam and Jews"

McCain has much to lose in this election, and many ways to lose it. If he is to win he has to be masterful as a politician, but appear to be doing it naturally. That might be true in any case, but the pressure is turned up on McCain.
Posted by Unknown at 2:52 AM No comments:

Who is doing this...

Someone is posting rather hateful speech over at Obama's website...

I wonder if it might be the same whack jobs that are posting hateful things at McCain's site....

McCain's Web site talks about the anti-Christ being 'a Jew,' Hillary being a 'bitch,' Obama being a 'Muslim fag,' and America bringing 9/11 on itself
Posted by Unknown at 2:47 AM No comments:

"An Italian woman whose family kept her locked in a room for almost two decades
after she was accused of becoming pregnant out of wedlock has been freed by
police, authorities and media reports said."

And Europeans think Americans are strange...
Posted by Unknown at 2:39 AM No comments: 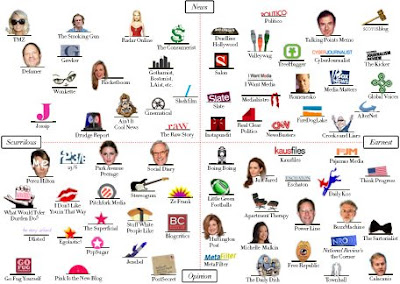 Vanity Fair maps the Blogosphere.
Posted by Unknown at 2:36 AM No comments:

"“If they bring a knife to the fight, we bring a gun,” Obama said in
Philadelphia last night. “Because from what I understand, folks in Philly like a
good brawl. I’ve seen Eagles fans.”"

While I understand what he is speaking to here, I think he has made a poor choice of words - once again.
Posted by Unknown at 2:33 AM No comments:

"Happiness is not achieved by the conscious pursuit of happiness; it is generally the by-product of other activities.
Aldous Huxley, Vedanta for the Western World, 1945
English critic & novelist (1894 - 1963)"
Posted by Unknown at 2:29 AM 1 comment:

"William Schenmeyer, 21, of East Greenbush, N.Y., was charged with second-degree
rape, sex abuse and endangering the welfare of a child, the North Country
Gazette reports.
Schenmeyer, a driver for ice cream distributor Mr. Ding-A-Ling, had sexual contact with the girl on at least two occasions, according to the Gazette."

"Michelle Obama could be considered a liability to Senator Barack Obama’s
presidential campaign, especially with her controversial 'For the first time in
my adult life, I am proud of my country' remarks."

As long as she acts to promote Barack as a candidate, she is a legitimate target.
Posted by Unknown at 2:25 AM 1 comment:

"Deal Hudson reports that John McCain “met privately” with Rev. Frank Pavone,
the Priests for Life head most famous for calling Michael Schiavo a murderer,
before a Catholic-outreach meeting in Philadelphia."

Are there any pastors of sense that can step forward to be a part of this election process?
Posted by Unknown at 2:23 AM No comments:

"The European Union’s Orwellian “reform treaty” has been rejected by the voters
of Ireland, and that means it’s probably dead—but only probably, because the EU
will now try to find a way to bypass the will of the voters."

The next step for the EU at this point is unclear, could it press for a revote by Ireland?
Posted by Unknown at 2:20 AM No comments:

Journey to the Center of the Earth: TV Trailer

"We've seen Chris 'Thrill Going Up My Leg' Matthews. Keith Olbermann admits
to MSNBC viewers that his network doesn't give a 'hard time' to Democratic
candidates. Olbermann defends Barack Obama by humilating Matthews. Democratic
stalwarts Lanny Davis and Ed Rendell blast MSNBC for not being fair to Hillary
Clinton and for [Keith Olbermann] saying things that should put him on the Obama
campaign payroll, respectively."

This is all a silly circus, and if you ask me it has little to do with journalism, and even less to do with politics.
Posted by Unknown at 2:16 AM No comments:

"RALEIGH, N.C. - A couple accused of tying their 13-year-old son to a tree for
two nights to punish him for disobedience has been charged with murder in his
death, authorities said Friday."

How do parents do things like this to their children, how do they think this is ok?
Posted by Unknown at 2:13 AM No comments:

"I really hope this story isn't true! Paul Newman is reportedly battling lung
cancer and has been suffering for several months. He is said to have pulled out
of directing a big-screen adaptation of John Steinbeck's book Of Mice and Men."

If this is true, Newmann won't be around for long. It will be a sad loss.
Posted by Unknown at 2:12 AM No comments:

"Classic kids cartoon characters The Smurfs are coming to life in a new live
action/animated movie."