Posted by Unknown at 1:32 PM No comments:

Posted by Unknown at 1:18 PM No comments:

Parislarryking1
Uploaded by jossip
Posted by Unknown at 2:55 AM No comments:

Posted by Unknown at 2:50 AM No comments: 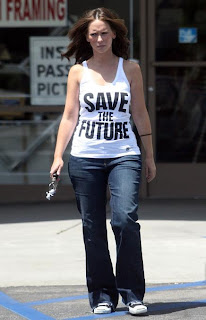 dailystab.com Hot Celebrity Gossip
Wow she really is packing it on isn't she.
Posted by Unknown at 2:46 AM No comments:

"In an effort to squash tension with West Hollywood Hills residents, a
strict no parking zone has been implemented in the area around Paris Hilton’s
home. There have been over fifty noise complaints in the neighborhood over the
last few weeks.
Anyone (namely a member of the paparazzi) parking in
mile-long, no-stopping zone will face a $70 fine and a $101.50 tow charge for a
standard-size vehicle. "

In exchange for a picture that could be worth thousands of dollars, sounds like a fair trade to me. Or you could be smart and just walk the last mile to her house. Which if all the lazy photogs don't even try to get a picture, just increases the value of the pictures you have to sell. Thanks LAPD.
Posted by Unknown at 2:41 AM No comments:

Emma, 17, said: 'You are careful not to do it in
the public eye. You have your first cigarette or first glass of alcohol in a
safe environment with your close friends - or you could be foolish and choose to
do it in a London nightclub.'

18-year-old Rupert added: 'Because we are
quite busy we do miss out, but we still have those kinds of experiences like
getting drunk for the first time.'"

Breaking news, Emma hopes to replace Lindsay Lohan on the party circuit as soon as she gets done with these stupid Potter movies. From what I hear her role in the last movie is going to end before Harry's does by the way.
Posted by Unknown at 2:34 AM No comments:

Matt Damon Doesn’t Know How Brad Pitt Does It

I’m Not Obsessed: Matt Damon Doesn’t Know How Brad Pitt Does It

I don't know how I would deal with it either. I think I would act crazy like Andy Dick from time to time, just to break up the mess and release some of the stress. I might babble at the photogs like Britney, but never would I harm anyone with a crotch shot.
Posted by Unknown at 2:28 AM No comments:

"She told Britain's OK! magazine: 'It's quite typical of him to get into another
relationship so quickly. He is the kind of person who needs to be with someone
all the time so it doesn't surprise me. I've moved on.'

When Dita filed
for divorce earlier this year she cited Manson's 'inappropriate relationship'
with another woman as one reason for the split."

Just to be clear, god doesn't make people ugly, people make themselves ugly. No one does a better job of doing this than Marilyn. Now we find out he is an insecure loser as well. He is on the cover of Spin magazine right now, and when ever someone buys it at my work, I turn it over so I don't have to look at him. On a side note, Michael Jackson does a good job making himself ugly too.
Posted by Unknown at 2:25 AM No comments:

Celebrity News!: Victoria Beckham To Star In An Episode Of 'Ugly Betty' - into GOSSIP.

Celebrity News!: Victoria Beckham To Star In An Episode Of 'Ugly Betty' - into GOSSIP.:

"He said: 'Victoria is keen and so are we. We can see her fitting in as a cameo
now she is about to be big in the US.'

The mother-of-three is desperate
to be a huge success Stateside and is hoping her appearance on the show will
help raise her profile."

Are they going to change the name of the show for that episode to Ugly Victoria?
Posted by Unknown at 2:20 AM No comments: 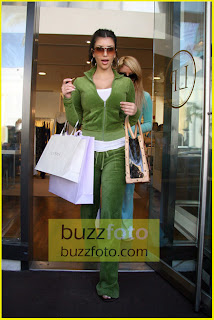 Buzz Foto LLC - Paparazzi Is An Art Form!: "Kim Kardashian shopping at La Perla"
Posted by Unknown at 2:18 AM No comments:

"How does Alanis Morissette keep on getting all the Hollywood hotties? First
there was Ryan Reynolds (have you seen him shirtless?) and now Matthew
McConaughey? This is complete speculation. It could just be that they ran into
one another and decided to go for a walk (at least that is what I keep on
telling myself). "

I am really speechless about this development. It could be that they aren't dating, but the thought of them dating makes me want to go crazy. It would be the final proof that Hollywood keeps it in the family, if you know what I mean.
Posted by Unknown at 2:16 AM No comments:

Rosie O’Donnell Has Some ‘Splaining To Do 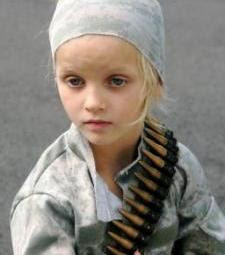 Rosie O’Donnell Has Some ‘Splaining To Do

"Yesterday, Rosie O’Donnell posted a picture of her four-year-old daughter
Vivienne Rose wearing a war costume which included a fake ammo belt. And BOY did
her fans react! Judy Faber from CBS’ The Showbuzz.com exclusively got a chance
to speak with Rosie and find out her side of the story."

This looks like the act of an attention whore to me, which is bad enough. It is even worse that she used her child to pull of this stunt. It makes me sick.
Posted by Unknown at 2:13 AM No comments:

"Lindsay Lohan was photographed getting some exercise with a group of friends on
a scenic trail. She was holding a pink rose and smelling it along the route. We
really haven’t seen much of Lohan since she has been in rehab. The only time she
actually leaves the grounds is to exercise which is both healthy and positive.
Perhaps this was exactly what she needed and is really ready for that change in
her life. Click on the thumbnails below to see more."

She is looking good, I hope there will be no more drunk photos of Lindsay.
Posted by Unknown at 2:10 AM No comments:

Celebrity gossip - see it our way | Britney wants his family back |

Celebrity gossip - see it our way Britney wants his family back :

"“The troubled pop star has been telling friends that filing for divorce from
her former backup dancer — he filed a counter-petition — was a mistake. Although
he had suspected that Spears has been stalling on the legalities of the split
because of second thoughts, Federline was still shocked when she dropped the
bombshell, a “source close to the couple” said."

That being said, it could be a good thing for her and the kids if this turned out to be true.
Posted by Unknown at 2:08 AM No comments:

"“She’s left Paul in no doubt that he is the man for her. She even let slip that
he’s better in bed than either Brad or Vince!”"

Having never met a trashy rumor about Jenn that I didn't like and feel compelled to share with you, I bring you this news that someone is better in bed than Brad. I guess you can't judge a book by its cover. On a side note, I think Jenn is one of the least trashy people in Hollywood.
Posted by Unknown at 1:56 AM No comments:

Gabby Babble: Didn't Take Long for Owen to Move On

Gabby Babble: Didn't Take Long for Owen to Move On:

"It looks like Owen Wilson isn't moping around and depressed about his break-up
with Kate Hudson as he has been seen out with two blondes in Rome over the
weekend. He moved on pretty quickly!"

Seems to be the nature of how those Hollywood relationships work. Then again it could be because everyone wants to be with a star, makes it easier to move on.
Posted by Unknown at 1:50 AM No comments: 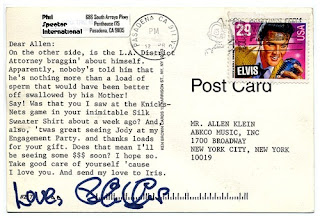 "Phil Spector sent a very thoughtful postcard to one of his friends, Allen Klein (known for his involvement with the Rolling Stones and the Beatles as a business manager). Phil was even so thoughtful to sign off with:"
Posted by Unknown at 1:47 AM No comments:

celebrity nation: Paris gave interview the day she was released

celebrity nation: Paris gave interview the day she was released:

"Of her first sleepless nights in jail: 'I was basically in the fetal position,
basically in hysterics.'

Of fellow inmates: 'All of the inmates were
very supportive. There were girls next to me. We could talk through the vents
and they were just really sweet.'

On her medical condition: 'The doctors
were observing me while I was there. They explained to Sheriff Baca that they
thought I was having severe anxiety, panic attacks, claustrophobia.'

On
people who doubt she will change after her experience: 'They're wrong and they
don't know me. I'm a compassionate person. I have a big heart. I'm sincere, and
they'll see.'"

Details from her interview with People Magazine. Sounds like she is taking the high road. As much as Paris gets trashed by the media, she rarely ever talks bad about others.
Posted by Unknown at 1:40 AM No comments:

celebrity nation: Wills and Kate - back on?

celebrity nation: Wills and Kate - back on?:

"Just two months after announcing their split, Prince William and Kate
Middleton have been secretly dating. 'It's true that they have been seeing each
other,' says a source. And a friend adds, 'They [never] loathed each other. It
just wasn't working at the time.' British press reported that the pair were
spotted talking and kissing at a June 9 bash in the prince's army barracks.
Palace reps will not comment on the official status of the couple, but a source
says, 'The spark is still there.' Both are expected to attend the July 1 Concert
for Diana."

It appears that the rumors that they were making another go at their relationship are turning out to be true. I wish them the best of luck.
Posted by Unknown at 1:37 AM No comments:

Hannity and Gingrich Put on the tin foil hats